Have you seen the ads for the new Lifetime reality series “Born in the Wild”? According to their website, in this new series “families take one step beyond homebirth and make the powerful choice to experience childbirth in the great outdoors. No inductions, no epidurals…just expectant mothers facing and giving birth in the arms of Mother Nature. They’ll take on the unique challenges of their natural environment, tackling every obstacle the wilderness can dish out in order to realize their dream of an outdoor birth.”

Quite possibly the best birth control video ever, my 14-year-old son thought the commercial was pretty graphic, which depicts a woman laying in “Mother Nature’s arms” (aka the dirt), with the baby literally bursting out of her vajayjay (the action was blurred but it was pretty obvious what was going on). “I can’t unsee that!!” he moaned, covering his eyes with his hands and worrying aloud about the possibility of retinal scarring. Unable to hide my amusement, I quipped, “Hey, what goes in must come out, right?”

Clearly horrified that perhaps I was about to launch into yet another TED talk (Terrifyingly Embarrassing Discussion) about human sexual reproduction (and all its attendant responsibilities and consequences), he deftly dodged the conversation by profusely apologizing for any pain and suffering he caused me during his birth. Considering that he was born into the arms of a fully licensed medical professional in a nice clean hospital and with the assistance of an epidural, his apology was accepted. He is however trying to figure out how to block the Lifetime channel from our TV lineup. And taking mercy on the poor guy, I tabled any further discussion on this topic for another day.

The show premieres on Tuesday, March 3rd at 10 pm on Lifetime.  My son won’t be watching. Will you? Let me know in the comments! 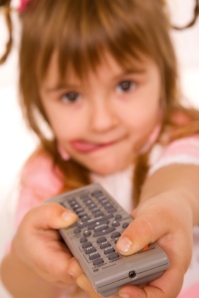 It’s the question that all mothers ask at some point or another – how much television is too much? When I was pregnant with my son, I was determined that television was going to have a supporting role – maybe even a walk-on part – not a starring role in my son’s life.  I was the mom who played Baby Needs More Mozart and read Dr. Seuss to my baby in utero.  Books lined the shelves in his nursery, little soldiers waiting to be deployed in the battle against too much television.

Then the real world came crashing in.  At first, there was Sesame Street and a few select educational videos, and that was it.  Through friends and playgroups, Blues Clues and Dora the Explorer arrived on the scene, and he was enthralled with his little “Thinking Chair”-shaped notepad and crayon, “writing” down clues everywhere we went.

Around the 1st grade, he came home asking about Spongebob Squarepants.  All the other kids were watching it, and he wanted to watch it too.  At this point, I didn’t allow TV watching during the week, only on weekends.  So one Saturday

afternoon we took a journey to a pineapple under the sea and met the denizens of Bikini Bottom.  Once again, he was hooked.  Me, not so much.  After a while, though, that little yellow sponge and his friends got the better of me, so much so that one summer we boarded the Nickelodeon Cruise to the Bahamas with Spongebob and all his friends.  I have to admit, we had a blast, with dad getting slimed in the process.

Fast forward to middle school.  The television watching rules during the week have been relaxed, as long as all homework and other responsibilities have been met.  And here is where I Iook for . . . balance.  Glazed eyes and slurred speech are a dead giveaway, of course, but if whatever’s flashing on the flat screen is taking away from something else, it’s time to act.  For example, if my son’s not showing off his newest Lego creation or the latest installment in a comic book he’s writing, or if we’re not engaging in a good old “well, what do you think?” session, that means there’s too much television.  Putting off going bike riding because there’s something on TV?  Too much.  Family time compromised (and this applies to all of us)?  Too much.  If a day or two goes by and I haven’t seen a book in his hand because of some can’t-miss TV show?  Too much.

These days when everything can be DVR’d or viewed on Netflix, television can take a back seat.  There are only so many hours in the day to engage in other pursuits and connect with each other; I don’t want my family giving that up to television.  Although, Wednesday night is “The Middle” night. . . .

How do you balance television viewing in your family?  What’s your tipping point?

Where Mom Is A Verb